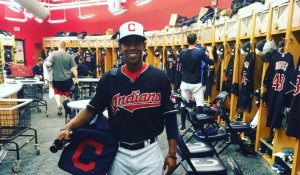 Yhoxian Medina, an infielder for the Cleveland Indians organization, will be visiting Blue River on April 28th, during the home game against Northeastern High School.

Before the game, Medina will be talking to the Blue River players. He also will be signing autographs and taking pictures with our fans during and after the game.

Medina is coming off a great season in the Minors and a strong spring training with the Indians. Last year, Medina had a batting average of .313, a .381 OBP and 26 stolen bases.

This past Spring Training, Yhoxian played 8 games with the Major League team, hitting .400.

A native of Venezuela, Medina came to the United States to play college baseball at Southeastern Community College, in Iowa, where he was drafted in the 38th round in 2011. He has been working his way up through the minor league system.

Yhoxian also plays in the professional league in Venezuela with Leones del Caracas, a team with a rich history of producing some of the best baseball players from Venezuela, including some Hall of Fame members. This past season, Yhoxian had his best season in the league there, earning a starter position among a team with a roster full of other Major League ball players.

Moises Rodriguez, the Blue River Valley Head Coach,  talked to Yhoxian and his agent, Hernan Ramos, about the possibilities of coming to our school and they were both really excited about the opportunity.

Medina is one of the many professional players that Coach Rodriguez has worked with in the last several years.